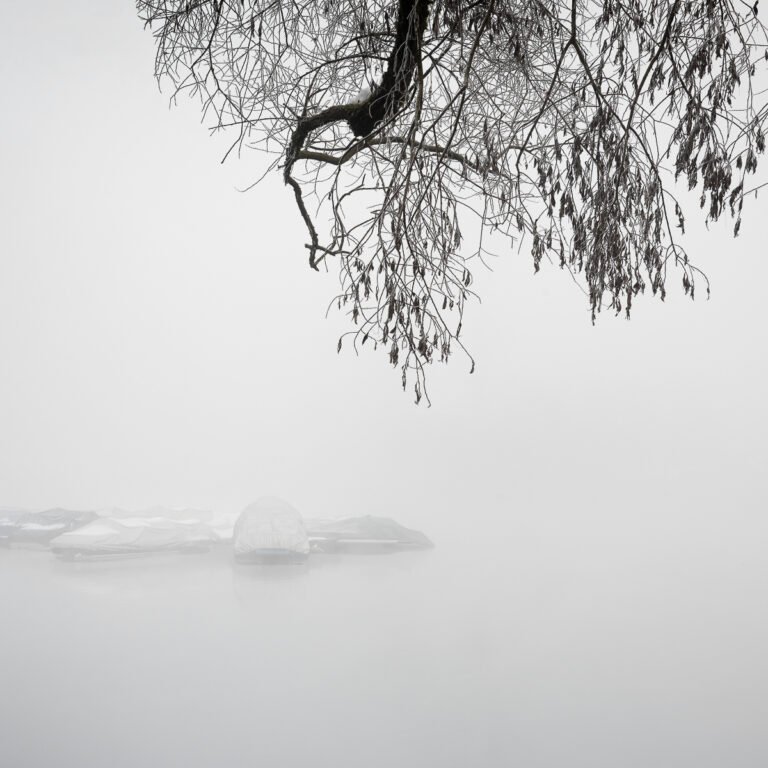 December 2020.
Due to the pandemic restrictions we spent the holiday in my girlfriend’s hometown Vigevano instead of the Alps. I knew it could get foggy at this time of year and with the snow on the ground I set off towards the nearby Ticino river.

I discovered the little harbour called Lanca Ayala which is the home of a lot of fisherman. There is more activity here during the summer but during winter it takes on a whole different atmosphere.

I went back several times over the course of the trip. On the third attempt, I had this shot in my mind where I wanted to line up some of the boats as a leading line and let them disappear into the fog. But I struggled a lot with the composition.

That’s when I started to look more to the environment and noticed a path on the other side of the water. Curiously I walked around the water where I fought my way through some bushes to get to the waters edge.

The only thing I could see from there were the boats in the distance with nothing around. The fog and the water transformed into one, and the subject came out beautifully. The whole scene took on an ethereal atmosphere, exactly as I had hoped. I started to realise this could become a really good shot but something was still missing. I found some trees overhanging the water next to me and tried to frame it so the branches would form a leading line towards the boats in the distant.

As the conditions were so flat and still, there was minimal technical effort in the shot except for capturing the scene a number of times to help omit any distractions in the water. Editing was kept to an absolute minimum.